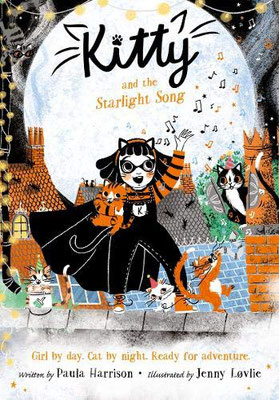 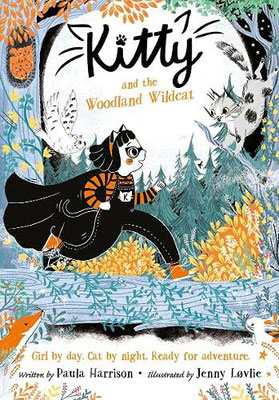 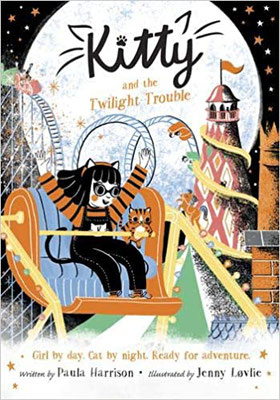 There are more Kitty books out this spring with Kitty and the Twilight Chase publishing in the UK and Kitty and the Great Lantern Race coming out in the States.

If you want to try some great Kitty activities, take a look at the Oxford Owl website here:

You can make a Kitty mask or try a draw-along with the Illustrator, Jenny Løvlie. You can also look at my Creative Writing Guide full of tips for writing your own stories!

This is the same series but with a different title in the UK than the one used in the States.

Royal Rescues is launching in the USA with the first two books, The Naughty Kitten and The Lost Puppy. Look out for them in book stores and online!

Bea loves animals and longs for a pet of her own, but her father, King George, says that the royal palace is no place for a pet. So Bea begins to help any lost or lonely animal that she sees, hoping to find them a good home.

The books are illustrated by Olivia Chin Mueller.

The fourth Kitty book will be out in May (in England but in the States I think it's out in the fall). It's called Kitty and the Treetop Chase and in it Kitty makes a very special new friend. It has amazing illustrations by Jenny Løvlie.

Over the next few days I will be adding free activities to this website for anyone to use. So if you are at home and running out of things to do then take a look! You can take a Rescue Princesses quiz or design a Kitty superhero mask. There are activities linked to the Secret Rescuers too.

Here are some Kitty masks designed by some fans!

Kitty and the Sky Garden Adventure will be out very soon! This is the third book in the Kitty series, written by me and illustrated by Jenny Løvlie.

With the help of her cat crew, Kitty must confront a group of very naughty creatures who are determined to spoil the beautiful rooftop garden. When they steal a special wind chime, Kitty has to use all her super powers to find them and bring the wind chime back.

It's been a very busy month since our new daughter came along! Please bear with me if I take a little longer to respond to fan mail and messages.

I have a new series launching in September called Kitty's Midnight Adventures all about a girl with cat-like superpowers! The first book is called Kitty and the Moonlight Rescue. These books are brilliant for younger readers with lots of amazing illustrations by Jenny Løvlie and they'll be published by OUP in the UK and Greenwillow (HarperCollins) in the States. They'll be out in lots of other countries around the world too!

The second book is also publishing this autumn, called Kitty and the Tiger Treasure. So look out for that one too!

I have a new series launching in April 2019, published by Nosy Crow and it's called Princess of Pets! It's all about Bea, who lives at Ruby Palace with her older sister, Natasha, and her little brother, Alfie. She loves animals and she longs for a pet of her own but her father, King George, says the palace is no place for a pet.

So Bea begins looking out for lost or lonely animals, hoping she can look after them and find them a good home.

These books will be published by Macmillan in the States next year!

I'm HUGELY excited to tell you that my publisher has asked me to write some more Rescue Princesses books. I know many fans of this series have been hoping for more stories!


I'm writing three more books at the moment. The first will be called The Enchanted Ruby and will be out in the UK in May next year. After that The Star Bracelet will be out in August. I don't have dates for any other country yet but I will let you know when I do.


In the meantime, I hope you enjoy catching your first glimpse of Princess Scarlett and Sparky the baby otter!

The cover for the second in the Robyn Silver series has been revealed!  The illustration is by Renée Kurilla and the book will be released on the 6th July.

Here are the covers for my brand new series Tiara Friends.

This April I'm launching a brand new series for younger readers published by Scholastic (coming in September if you're in the USA). It's called Tiara Friends and it's a mystery series set in Peveril Palace. Millie and Jess are best friends and they look so similar they could be twins! But Millie is a princess while Jess is a palace maid. They love swapping places and having adventures around the palace. No one ever notices if they swap clothes except the cook! They're also about to find out that they have a hidden talent for solving mysteries...

The first two books are pictured to the side and below. Covers and illustrations are by Michelle Oullette.

For those of you in the States, the Secret Rescuers series launches on 7th March 2017 with The Storm Dragon and The Sky Unicorn. The series is being published by Aladdin and the third and fourth books will be released in summer 2017.

Robyn Silver: The Midnight Chimes has been released! My publisher, Scholastic, are running a fabulous competition to win an iPod and £150 of book for your school. All you have to do is dream up your very own scary monster! You can find out more on their website and view some You Tube videos of my writing tips!  https://www.scholastic.co.uk/robynsilver

I'm writing two series for Scholastic. The first is pictured here - Robyn Silver - launching September 2016. The second is a mystery-solving series for younger readers, out next year.

The 3rd and final book in the Red Moon Rising series will be published in May. Here's the book cover, illustrated by Lisa Evans. I think it's gorgeous!

The Rescue Princesses has sold more than one million copies worldwide!!! Read about it in The Bookseller here: http://www.thebookseller.com/news/nosy-crow-series-tops-one-million-sales-mark

My big news this spring is that my publisher, Nosy Crow, are re-releasing my two Faerie Tribes books with new titles and covers. The Crystal Mirror has become Red Moon Rising, publishing in April.

Dark Tree Shining will publish in October and replace The Wildwood Arrow. The third book in the Red Moon Rising series will be published in spring 2016.

I also have a new series for younger readers out this year. Check out the The Storm Dragon!